was doing during the war. I knew he was an officer on LST 463 in the South Pacific. But he only told the funny stories and sidelights. Nothing serious.

He conspired with the others on board, he told me, to tell visiting admirals that they had to walk bow-legged to avoid broken legs if a torpedo should strike the welded hull of  their landing ship. The admirals complied, patrolling the deck like Groucho Marx.

As supply officer, he once found a stash of Japanese cigarettes in a cave onshore and brought them back to the ship. He and all the men got sick, lying on the deck, puking, and he never smoked again. 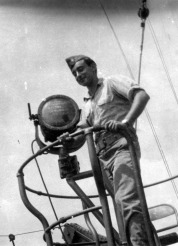 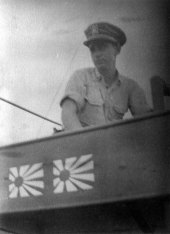 ad used his engineering skill to figure out the parabolic movements of ordnance in the air, drawing imaginary lines to shoot down a diving airplane.  He shot down two or three zeros.

Then I found his deck logs: He was on watch the morning of October 20, 1944 as the U.S. fleet moved in for the start of the invasion of the Philippines at Leyte Gulf. The ship came under fire as it opened its forward ramp to unload men and supplies. Later that day, they took on the wounded.

Fragments of the battle pushed me to look for more. The search directed me toward writing “MacArthur’s Spies,” about people surviving and fighting  in the Philippines during World War II.

When I visited the Philippines, I went up to the Manila US. Military Cemetery. There are 17,191 people buried there, and 36,286 are listed as missing in action. My dad s

urvived the Philippines, but I went to the memorial wall to look for familiar names. I found one man with my last name. Jacques Eisner from New Jersey where my dad was born. Born in 1919, just like my dad, died back then during the war, never made it beyond 25, out there in the Pacific.

My dad had survived. The story deserved to be told. These are the underpinnings of MacArthur’s Spies.